Prepare some tissues as Asianovela Channel will set to air the live action movie of Your Lie in April this Sunday on its AC Weekend Cinema block. 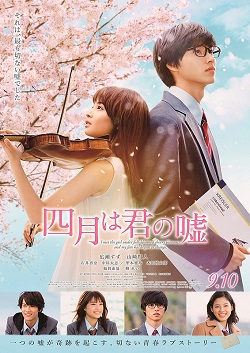 Your Lie in April is a 2016 Japanese youth music romance film directed by Takehiko Shinjō, written by Yukari Tatsui, starring Suzu Hirose and Kento Yamazaki and based on the manga series of the same name written and illustrated by Naoshi Arakawa.

It was released in Japan by Toho and the Philippines via Pioneer Films last September 10 and December 2016 respectively.

According to the program schedule posted by Asianovela Channel on its Facebook page, the said movie will air this Sunday at 11am with replay at 9pm.

Asianovela Channel is an all-day digital channel which dedicates to Asian Dramas and Movies.

Asianovela Channel is currently available exclusive on ABS-CBN TVplus on a free trial basis until December 31, 2018.