Two new aspirants moved up and performed live as part of this week’s Top 10 girls as revealed today, February 17, on ABS-CBN’s It’s Showtime.

After a week of rigorous training and rehearsals, this week’s top-rankers wowed the audience with their group performance of Anne Curtis’ OPM single “Empire of Pink”.

Eunice and Sayaka have maintained their rank as Top 1 and Top 2 for the second time. Let’s take a look at our week 3’s Top 10 future idols according to their rank: 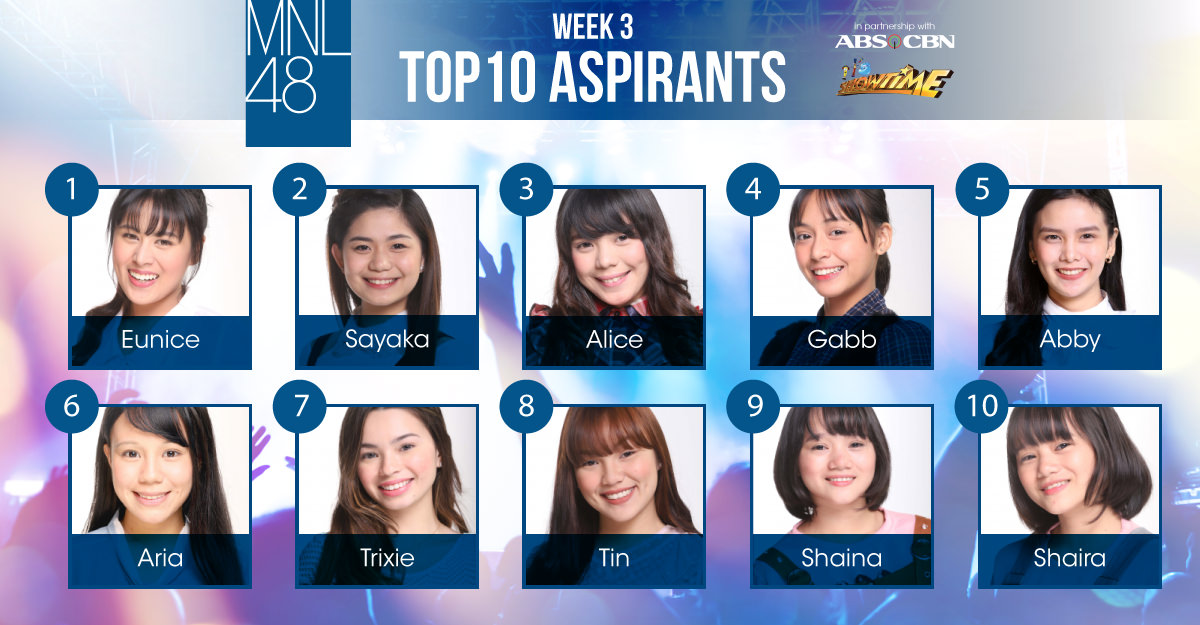 Aside from the Top 10 girls who performed today, the idol hopefuls were in for a big surprise as another group of talented girls got a chance to perform live to prove that they are also idol-worthy.

However, as the competition gets tougher, starting this week, our future idols will have to double their hard work and dedication as MNL48 advisers, coaches, and produces will eliminate five aspirants every Saturday. Earlier today, Zara, Zhyra Ica, Isha, Krizzia, had an emotional farewell on It’Showtime as they bid goodbye to their fellow candidates.

Make sure to continuously campaign for your Oshi and vote for them using the MNL48 Plus Mobile App to secure their spot in the succeeding weekly Top 10 ranking and watch them perform live on It’s Showtime every Saturday.

Aside from the MNL48 segment on the Kapamilya Network’s noontime show, fans and supporters can get up-close and personal with the MNL48 finalists by tuning in live to MNL48’s Online Update airing daily at 6PM on its official Facebook page and YouTube channel.

To view the complete Top 75 ranking, you may visit the MNL48 website and MNL48 Plus mobile app, and get the latest updates by following MNL48 social media accounts.